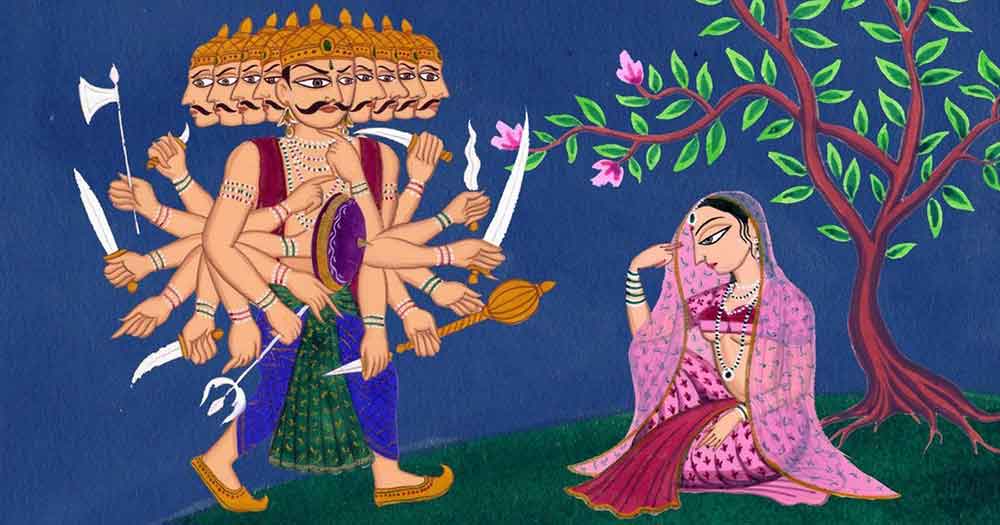 The Adbhuta Ramayana, has a very interesting and an unusual episode of a strong Sita, not found anywhere, except in an Odiya version.

Once Rama was bragging to his courtiers how he had killed Ravana. Sita sat beside him, smiling an all-knowing smile. Ram took offence to her smile and insisted that she explain. And then begins Sita’s short reminder to her husband as to how she once did that he had not been able to. Sita reminds Ram that he had just killed the 10-headed Ravana, but how he failed miserably when he was confronted with the 1000-headed Ravana! The story is mentioned in the Pushkara Kand, where Ram after the death of the 10-headed Ravana had to contend with an elder brother of Ravana, who was 1000-headed. This proved too much for Rama, and he fell unconscious in the battlefield, after being overcome by Ravana’s might. At that point, Sita assumed the form of Kali, the destroyer goddess and it was she who killed the monster and rescued Rama from his clutches. Quite obviously, this story has its influence in the Sakta philosophy, according to which, the ultimate energy of the universe derives from the feminine principle of its composition and is thus truly to be assigned to various forms of the Great Goddess, of whom Sita is a manifestation.

In a slight variation, an Odiya version (Vilanka Ramayana, by Sarala Dasa) has a similar story, but the execution is slightly different. When all efforts to defeat this Ravana fail, it was decided that Sita’s help should be sought. Much to his discomfort, Ram asks Sita to help, and Sita steps in valiantly. She knows that this is no ordinary demon and special fights call for special moves, so she uses the five arrowed weapon of Kamdev, the panchsar of Kandarp. This unsettles the demon and the Vilanka Ravan comes to her with a begging bowl, asking for love. As he sits there bent before her, Ram beheads him.