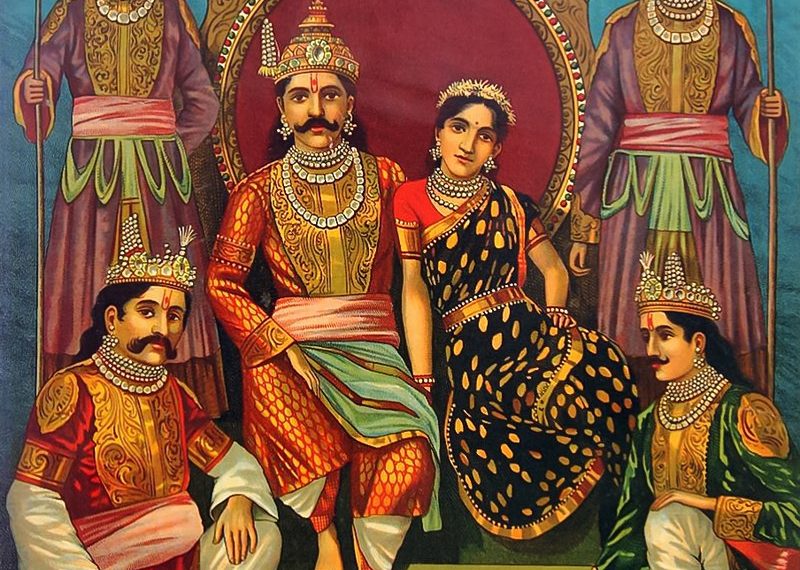 Sarala Dasa’s Odiya Mahabharata has an interesting folk tale that is not found in any other version of the epic. In the last year of exile of the Pandavas, when they had to remain incognito or risk spending 13 more years in hiding, Duryodhan was pulling every trick he knew to ferret out his cousins. When much of his efforts came to nought, he sent for the four sons of a Brahmin priest, Puranjan Panda. Panda had perished in the Jatugriha (Lakshagriha) and his sons were eager to avenge their father’s death.

Duryodhan told them that they should spread out in all four directions of the world and bring the Pandavas to him. How could they do that? He had  solution: Ask every ascetic/reclusive resident of the forests they visited to produce a mango for their meal. If they failed, as they ought to, since this was not the season for the fruit, the Pandavas would be exposed as ordinary mortals and face the ire of those who were keeping them hidden and this, the Kuru prince, believed would ensure their shame and death. If not, if a mango were to be produced that is, they should bring the fruit back to him and reveal the location of those who had provided the fruit. Duryodhan would then march in with his army and put an end to the Pandavas.

Of the four, the eldest son, Gourmukh went to the North. And after a long search, found himself in the same forest as the Pandavas. He sat in penance beside a river and Yudhisthir found him and offered him food. Gourmukh said all he wanted was meat, rice and fresh ripe mangoes.

In a tizzy, the brothers conferred among themselves as to how to bring a mango to the table well before its time. Yudhisthir decided to call upon the great lord, Krishna.

Krishna tells him that what cannot be achieved normally, can be gained through piety. He brings a mango-stone from Vyasa and plants it and says that the plant will bear fruit as soon as the Pandavas and Draupadi truthfully narrated before it the story of their life. A lie would destroy everything, however.

After the Pandavas narrated an incident each and when Draupadi finished hers, there indeed was a mango on the tree! The mango was offered to Gourmukh, who immediately left for Durydhan’s palace. Krishna however, omniscient and omnipresent, knew what he was up to. He appeared in front of Gourmukh as a learned sage, warned him that what he was carrying back for the king was not a mango at all.

Sceptical and eager to take the mango back to Duryodhan, Gourmukh ignored him and started to make his way when Krishna told him that he could still make the mango a ‘real’ one. How? By speaking out improbable truths such as: “Women are stronger than men”, “Men, not women, give birth to children”, “Lotuses bloom in the mountains and are without fragrances.”

But no sooner are these lines spoken than the mango disappeared; being the fruit of truth, the falsehoods brought about its end. Gourmukh went back empty handed and relayed the entire chain of events. His story was met with ridicule and censure and a unanimous verdict that one can never trust the Brahmins and the stories they tell.

In the 15th century Odiadesh, the story found tremendous appeal among its listeners, many of whom were oppressed by the rigid caste system then prevalent. And when told within the familiar and popular narrative structure of the Mahabharata, it resonated even more deeply with its audiences.