The merchant and the swan 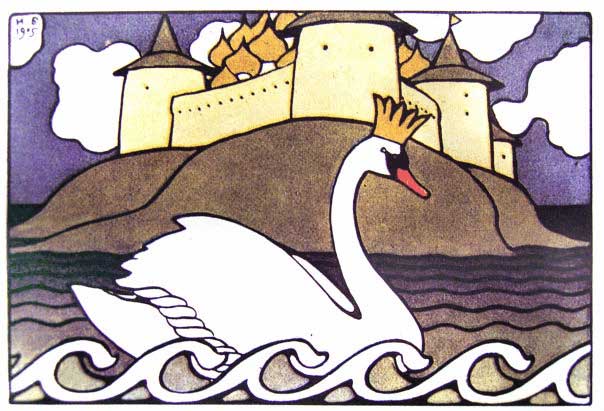 Once upon a time there lived a successful merchant who passed away well before his time had come. He left behind his wife and a son who had barely grown up to his knees. As the boy grew older he would ask his mother about his father and always she told him this: You father was a merchant and often spent time away in distant lands for which he paid with his life. If he were alive now we would not be in such distress.

As the boy grew older, he often thought about his father’s life and increasingly sought to follow in his footsteps. But his mother refused to let her son out of her sight, until one day he grew too big for her to hold back anymore. So she gave him her savings to start his own trade.

He bought merchandise and hired a boat and took two men with him and then set out to strange lands to peddle his wares. His boat docked at the ghat of a distant village and the young merchant that the boy had now become, sent his men out with the things they had brought along.

The boy waited by the boat and as he spent his time looking around at the goings-on of the new village that he found himself in, he saw a beautiful swan. White and pristine, the feathers glistened in the sun. As he watched, the swan stepped out of her skin and into the water and out emerged a beautiful maiden. Enchanted he stayed on in the village long after his men came back after their day’s ales were done. The swan maiden lived with her old parents and the merchant soon became their regular, giving them his wares without charging a price. But soon his goods were all sold and it was time to go back and he went to the old couple and offered them all his money in exchange for the swan maiden who he wanted to take as a wife. The couple gave him their daughter and off the two sailed back to the boy’s home where his mother was beside herself with worry about his whereabouts.

Back home, mother welcomed her son and the swan he had brought with him. However much to the boy’s dismay and despair, the swan did not change into a maiden like she used to. He was aghast and such was his dismay that he refused to sleep or eat.

His mother was distraught. A wise old woman then said to her that her son seemed to be under severe distress but he would not be able to tell her about it. Bring him a fair maiden, ask her to comb his hair and cry into his hair and when he asks why, she should tell him that she is saddened at the state of his health. This should make him reveal his secrets, she said.

So a girl came and combed his hair, and wept silently till the boy finally asked her what the matter was and when she said that she could not bear to see him lose his life thus, he spoke up. And she quickly went and told the mother who told the wise woman.

The wise woman then drew up a plan. Stay up till midnight she told the boy. Then she said, the swan maiden would strip her feathers and pray to her own gods, and that was when the boy should burn her feathers if he wanted to keep his wife a human maiden forever.

So the boy prepared a basin of oil and ashes and a yak’s tail, and did as the wise woman had asked him to. As he lay in his bed pretended to be asleep, his swan-wife came up to him, feeling him all over with her beak until she was sure that he was lost in sleep. And then she stripped off her swan’s skin slowly, and prayed aloud to the gods of her own country.

The boy waiting for the moment, jumped up and took the skin that she had cast aside and burnt it to ashes. The poor swan maiden looked at him aghast. At first her despir knew no bounds but as he anointed her with oil and fanned her with the yak’s tail, she slowly came around and saw how much she loved him. And the two lived happily thereon.

Source: A collection of Kachári Folk-tales and Rhymes, Intended as a supplement to reverend S. Endle’s Kachári Grammar; By J. D. Anderson