The monkey and his bride 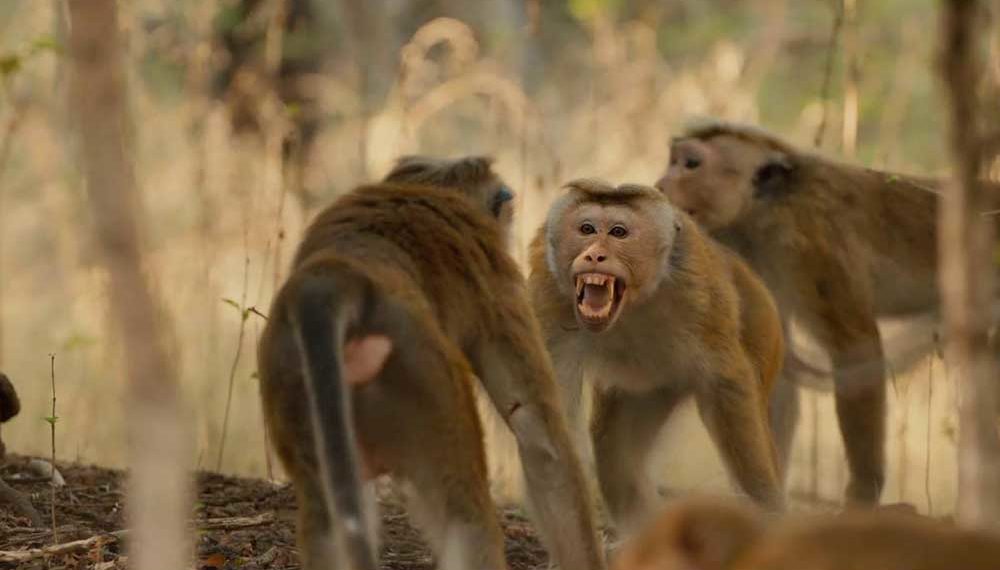 In a village in the midst of a very hot summer, one afternoon, a group of girls went bathing in the local pond. They were splashing around in the water until it was time to go home and as they all clambered out, one by one, and stepped into their clothes, one girl stood by puzzled. Her clothes were nowhere to be found.

All the girls began to search for the clothes when one of them spotted a Hanuman monkey atop a tree with the missing garments. They begged the monkey to give it back, but he said, “I will not give it unless its owner consents to marry me.”

The girls then threw sticks and stones at him, but he climbed higher and higher on the tree. The girls then called in the adults. The girl’s parents came and at first shot arrows and pelted stones at him, asking him to give back the clothes. But the monkey escaped it all and then the parents began to cry and sing: “Give back the girl her cloth, her silk cloth.” And then the girl’s father’s younger brother and wife came to the spot and they too sang and cried, but the monkey did not change his refrain: “Give me the girl and she will get her clothes back.”

And then the girl herself begged for it. The monkey came down the tree he was on and offered one end of the cloth to the girl. But when she caught hold of it, he pulled her up into the tree and ran off with her on his back. The girl did not seem too unhappy and called out to her parents as the two sped across the tree tops, “Don’t worry mother, don’t worry father, I am going away.”

The monkey and his bride began to live in the mountains. They lived on the fruit from the trees, bananas, jackfruit, apples or whatever else grew there. The girl ate them all but only if she saw that the fruits were not marked by monkey teeth—for she would not eat anything that the monkey had bitten into. One day she said to him that she was tired of just fruits and wanted some rice for her meals, so the monkey went about the villages stealing pots, pans, rice and some fire for her cook the rice. She did and he liked it so much that the couple spent a lot of time in the villages.

Then the girl asked for more clothes. So the monkey went to steal them, but this time the villagers were alert and they drove him away. After a while the girl and the monkey went back to the cave and there the monkey had an idea. He got her a lot of fruits and said she could go and sell them in the market in the village and that could help buy new clothes.

But the girl, when she had sold the fruit, stayed in the village and never returned to the monkey. The poor monkey waited for her, but she did not come back. She married one of the villagers and stayed on in the village while the monkey spent his days sorrowfully on the hill.