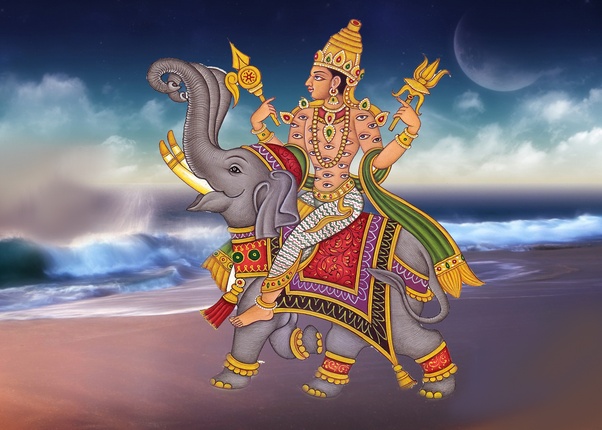 Rishi Gautam was married to a girl, exceedingly beautiful and several years his younger—some said almost like his daughter—by the name of Ahalya. Her beauty ought to have brought her a far younger husband, but that was the way of the world and she had learnt to live with it.

However Indra, king of the gods, was not happy to let things be. He had spied on Ahalya on several occasions and his passions had been all stirred up by her wispy beauty. So one morning, he waited for the sage to leave for his daily routine, and then taking on the form of her husband approached Ahalya.

He asked her to come to bed with him, an odd request from a sage who knew that this was no hour to indulge in such activities thought Ahalya. Indra had approached her at that hour known as brahma-muhurta, an inauspicious hour for amorous dalliances.

Still Ahalya did not protest and some say unknowingly, while others believe knowingly, gave in to Indra. Gautam Rishi however, the seasoned sage that he was, sensed there was something amiss and decided to return home, well before his appointed hour. As he came close to the hut, he saw Indra sneaking away and his anger that was always at the tip of his nose flared into monstrous rage.

He knew what had taken place and hurled abuses at both Indra and his wife, turning her into stone. This would be her penance, he said until she became “lobha moha vivarjita, (moha, the result of Kama, desire, and lobha, greed, the itch to savour a different type of sexual experience)”. Many years later Ram would rescue her from her fate by placing his feet on the stone, bringing her back to life.

As for Indra, he was cursed to bear the mark of 1000 vulvae; that what he coveted the most would be his burden to bear, the sage said. Indra was appalled and so were the gods and they pleaded on his behalf. And finally the sage gave in and changed the marks to eyes, and thus Indra is also referred to as sahasra-aksha, the one with a thousand eyes. And it was also the intervention of the gods that led to Ahalya’s eventual salvation from an incarnation of Vishnu.

Interestingly, the Valmiki Ramayana says that Ahalya consciously chose to give in to Indra, she was not deceived or forced, simply because she was curious. Scholars have also interpreted her character as the archetype of feminine beauty and creative spirit who naturally responds to the ardent, urgent and the direct sexual advances by the ruler of the heavens who also presents a dazzling contrast to her ascetic, aged forest-dwelling husband.

To come back to Indra, the 1000 eyes on his body were too much of a burden to bear too and he gave them over to the peacock who decorated his tail with him. (Read a Greek tale on how the peacock got its 1000 eyes here: Chasing Bosphorus).